Should Parents Make Their Child Practice?

I'll bet that most piano teachers can relate to this:  I wish I had a nickel for every parent who has said to me in an interview, "I'm not going to MAKE him/her practice." After 20 years of experience, I've come to see this as a tip-off that, if I accept the student, there is a decent chance that he or she won't stick with piano longer than two years. I wanted to know if there was any real truth to that belief or if I could find some evidence for it.

As a child, I occasionally needed some enforcement of the practice routine from my parents, even though I loved playing and never entertained the idea of quitting. I wondered if other piano teachers would say the same about their childhood piano study.

I posted my question yesterday in two facebook groups:  Piano Teacher Central and The Art of Piano Pedagogy.  I got a huge number of responses! In fact, the responses are still coming in, but I decided to tally the results at 9:00 this morning. I had a total of 293 answers!


I’m taking a poll. I have a hunch that most of us who are now music professionals sometimes needed our parents to give us a push about practicing when we were growing up. Which of the following choices best describes your childhood piano practice routine? This could be useful information to share with our students! (B is the answer for me.)

A. I was always self-motivated to practice. My parents never made me practice.

B. I was mostly self-motivated to practice. My parents sometimes made me practice.

C. My parents often had to make me practice. I was only occasionally self-motivated.

D. I was rarely self-motivated to practice. My parents are the main reason I learned anything.


I later posted to clarify that I specifically wondering about the elementary years. Had I said that when I first posted, it might have changed the results. This graph shows the percentage of each answer choice among the 293 total answers. 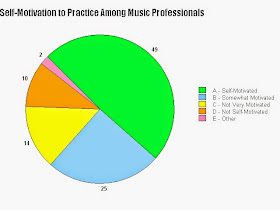 I confess that I got more A answers than I was expecting. Maybe I was projecting my own lack of discipline on everyone else! I suppose that among music teachers, I shouldn't be surprised that most of them loved practicing! The A answers represented 49% of the whole. A large number of the A answers indicated that their parents sometimes had to make them STOP practicing!

The E answers were ones that didn't fit well into any of the other categories. They ranged from "I didn't practice" to "I don't know if I was self-motivated or not because my parents gave me no opportunity to be."

Ultimately, though, my original hunch was pretty good. I think it's hugely important to note that a full 49% of people who now earn some or all of their income as musicians answered B, C, or D. "We needed a push from our parents at least occasionally." Many of the B and C responses indicated that by middle school or high school, self-motivation had taken over because their successes had spurred them on to greater effort. Considering that these answers came from people who now earn money as musicians, I suspect that among the general population, that percentage would be even higher. Of course this survey is entirely non-scientific, but the results suggest to me that in order to become competent at playing an instrument, at least half of students under the age of 13 or 14 are going to need the parent to be willing to enforce the practice routine.

So what does this mean in my studio? Well, it encourages me to believe that more students than I expected could turn out to be entirely self-motivated to practice! That's good news! But, this information also gives me something realistic to share with piano parents who say that they aren't willing to make a child practice. There's at least a 50-50 chance that your child might eventually be very grateful that you made them practice.

In my studio, when the parents indicate that the child is never self-motivated and all of the practice is at the parents' insistence (the D answer), I support their desire to quit. Sometimes, I wonder if it was the right answer, though. Ten percent of the responses to the survey were D!

Ultimately, a parent's decision to make a child practice or not is a very personal one influenced by many different factors. Teachers, parents, and students should weigh all of the pros and cons in each individual situation together. I do think, though, that there is a perception that the "good" students are always self-motivated. This informal survey suggests otherwise.

I plan to show parents this article and graph and encourage them to use this information, non-scientific though it may be, in their decision about whether to require their child to practice. You can do the same. At the end of the post is a link to a printable document you can share with your parents.

What do these results say to you? Do you think I'm overstating my case? How would you use this information in your studio?

I would love to have you join the conversation here at The Piano Studio as long as your comment is respectful and relevant. I will remove comments that link back to commercial sites. If you would like to advertise on my site, please send me an email for rates.